Enjoy a culinary tour of Britain’s best foods. Whether you want something sweet, savoury or a little bit different, you will find a fascinating story to accompany your favourite feasts!

A seaside staple; no visit to the seaside is complete without a trip to the chippie to enjoy what Winston Churchill described as ‘the good companions’.

Fried fish may seem like a traditional British dish, but the idea originated come from Spanish and Portugese refugees who introduced it to the UK. The advent of the railways and trawl fishing meant that fish could be transported easily throughout the country and a trend was born!

Fish and chips are an early example of fusion food with one of the first mentions of chips coming from Charles Dickens’ A Tale of Two Cities in 1859. So important are fish and chips to people of the UK that they were one of the few foods never rationed in both World Wars.

Where to enjoy: Many say you get the best fish where you can see the sea. We’d have to agree; there’s nothing like fish and chips at the seaside. Visit Devon or Yorkshire for the best regional fish and chips – according to the National Fish & Chip Awards.

A mainstay of the roast dinner, Yorkshire puddings were invented in the 18th century and originally named ‘dripping puddings’ after the fat that dropped into the pan from roasting meat.

Yorkshire puddings were a lighter variation and originally served as a first course, where diners would fill up on it so they would eat less of the more expensive meat course that followed. Today, only the most devout fan of the ‘Yorkie’ would eat one without an accompaniment of meat, potatoes and gravy – though ‘toad in the hole’ with sausages is an acceptable alternative!

Where to enjoy: The Yorkshire Dales of course!

While you can enjoy a Yorkshire pudding anywhere in the UK, today if you’re looking to enjoy a traditional Cornish pasty you need to either visit Cornwall or find one that was made there.

In 2011, Cornish pasties were awarded ‘Protected Geographical Indication’ (PGI) status by the European Union. This means that only Cornish pasties shaped like the letter ‘D’, with ingredients of beef, swede, potato and onion and prepared in Cornwall could be sold as such.

This means they can be baked elsewhere, but if you see a Cornish pasty sold in the wild outside of Cornwall it means it will have been made in the far South West corner of England. For the true authentic taste, not to mention a great reason to visit one of the UK’s most stunning locations, we’d recommend visiting Cornwall to enjoy one for yourself.

Where to enjoy: Cornwall of course!

Perhaps a surprising addition, but this delicious delicacy is claimed to have originated in 1970s Glasgow by chef and proprietor of the Shish Mahal restaurant Ali Ahmed Aslam.

According to a tale told to the Hairy Bikers, a Glaswegian bus driver returned his chicken curry saying it was too dry. The chef, on a diet of tomato soup due to a stomach ulcer, added some to the dish, a classic was born and the driver and his friends came back so many times that they put it on the menu!

It’s a long journey from a Glasgow curry house to Westminster, but in 2001 Robin Cook, the British Foreign Secretary, declared that chicken tikka masala is “a true British national dish, not only because it is the most popular, but because it is a perfect illustration of the way Britain absorbs and adapts external influences.” We couldn’t have put it better ourselves!

Where to enjoy: Visit Glasgow for the unlikely home of this classic curry.

Britons have the invention of baking powder to thank for the creation of the delicious  scone. One of the most refined eating experiences one could wish to enjoy, before baking powder was added scones were flat, wide as plates and baked on a griddle from unleavened oats.

Once scones could rise they were baked in the oven and the scones we know and love (and eat!) today were born. Sweet scones with cream and jam are a firm favourite, but it’s safe to say that scones are as versatile as they are delicious! Savoury, cheese and many more variations are all available for enjoying.

Where to enjoy: Scones with Devon cream in Devon are to die for! 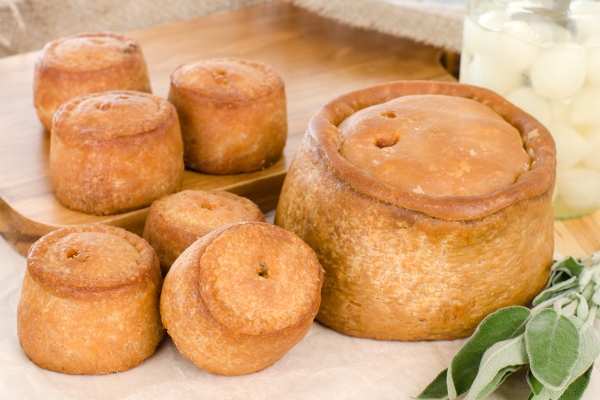 The humble pie can be traced back to Egyptian times, with very basic pies being baked on hot coals. The Greeks then built upon this with the addition of pastry and meat, and this was then taken by the Romans – with the pastry ‘cover’ often thrown away instead of being eaten.

Once pies reached medieval Europe they started to resemble the pies we eat today. The pastry was baked until it was almost inedible (rumoured to have been used by the gentry to feed their servants!) but the filling was normally bird, more specifically, magpie. Hence the name!

Melton Mowbray pork pies gained popularity amongst fox hunters in the late 1700s. The crusts are hand shaped and the pies are baked free-standing, which gives them their unique shape. So unique are Melton Mowbray’s pies that they gained ‘Protected Designation of Origin’ status from the European Union. Only pies made with the specified technique and within a designated area can be labelled Melton Mowbray.

Where to enjoy: Melton Mowbray in Leicestershire is the only place to enjoy pork pie perfection.

Rumoured to have been invented in Spain in the mid-16th Century, the common sponge was one of Queen Victoria’s favourite desserts, but with the addition of jam, cream and a light dusting of sugar on top it became the classic we know and love today.

The Victoria sponge is also cooked with extra fat, to ensure an incredibly indulgent dessert. Though the recipe is relatively straightforward, as Marry Berry will doubtless tell you, it’s all about timing and temperature to ensure a good rise and consistency. For that reason many oven manufacturers use the cake recipe to test their products!

Other British recipes named after famous people include peach melba, invented at the Savoy in London in honour of Australian opera singer Nellie Melba (the same chef also invented Melba toast – obviously a bit of a fan!). Beef Wellington was named after the Duke of Wellington, and the common sandwich was named after John Montagu, the 4th Earl of Sandwich – who reputedly demanded meat tucked between two pieces of bread from his valet, and thus, a culinary institution was born!

Where to enjoy: Queen Victoria was a great fan of the remote beauty of the Isle of Wight, so enjoying a Victoria sponge amongst the glorious green countryside and gorgeous seascapes seems like a perfect celebration of this classic cake.

How to convert your property into a holiday let