Assemble your own super team to visit these stunning UK film locations – and find incredible holiday cottages to holiday like a hero afterwards!

The Avengers’ sequel Age of Ultron opened with a snowy motorbike chase through Surrey’s Bourne Woods. No stranger to film crews, the location also appeared in the opening sequences of both Thor: The Dark World and Gladiator. Meanwhile, Dover Castle in Kent provided the tunnel-like interiors of the villainous HYDRA base that the heroes were racing towards.

The Avengers’ futuristic base at the end of the film was actually the Sainsbury Centre for Visual Arts in Norwich. Designed by architects Norman Foster and Wendy Cheesman, construction was completed in 1978. The location also had a supporting role in Marvel’s Ant Man and Spider-Man: Homecoming.

Avengers: Infinity War also filmed on location in some of the UK’s most lovely historic locations, including Edinburgh’s Old Town (where Vision and Scarlet Witch’s short break is spoiled) whilst Endgame offered an out-of-this-world visit to Durham Cathedral (where Thor and Rocket return to a familiar location). 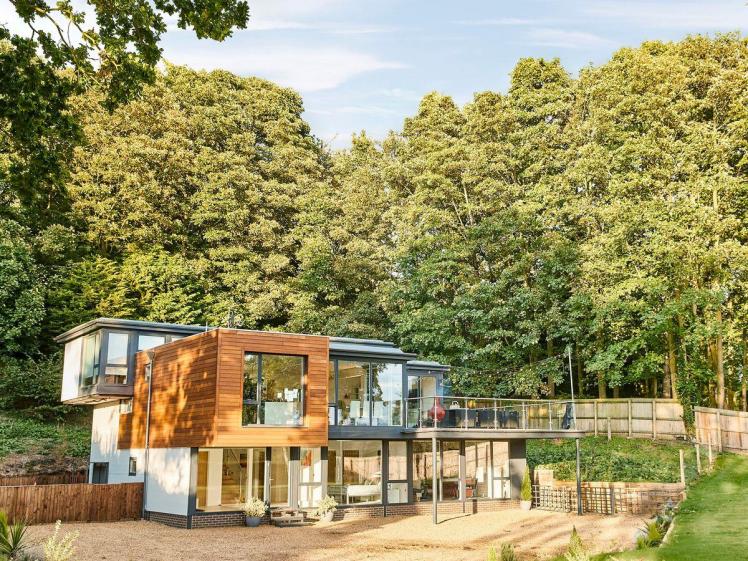 Huge glass windows and plenty of space for your own dream team to assemble, Sunnybank in Norfolk is the ultimate hero holiday pad.

There are plenty of places to follow in ‘The First Avenger’s’ footsteps – including the site of his first proper action scene. The villainous HYDRA base in the first Captain America film was located in an old army base in the Caerwent countryside close to Chepstow.

Scenes of an attack and chase through the streets 1940s Brooklyn were actually filmed in the very hip Northern Quarter of Manchester. There are loads of trendy bars and eateries there today if you fancy a more modern – and less exhausting! –  tour of the city. 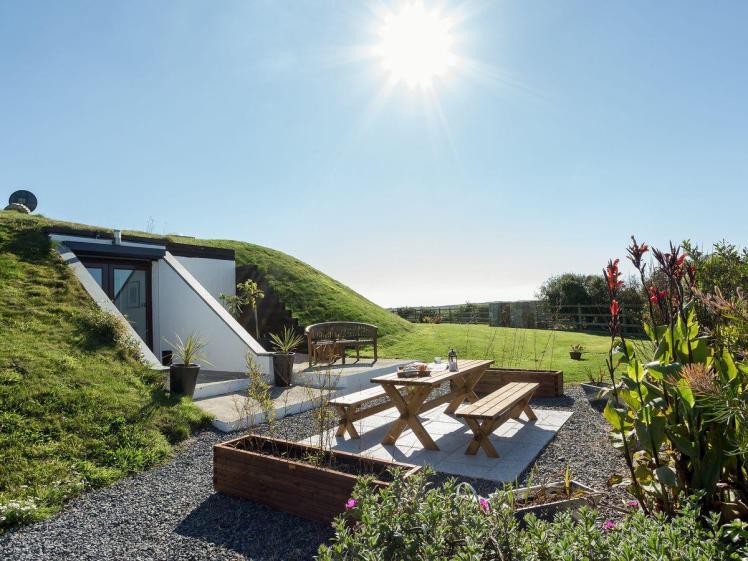 The Bunker in Cornwall is a World War 2 operations bunker that has been converted into spectacular luxury accommodation. We really can’t see Captain America holidaying anywhere else. 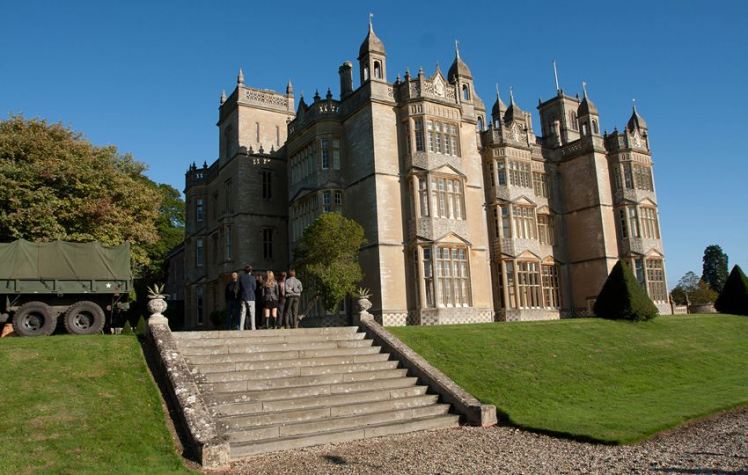 Set in the swinging sixties, the iconic Xavier Mansion in X-Men: First Class was actually Englefield House in Berkshire. Although it’s a private residence you can still take a walk through the gardens from April until the end of October. 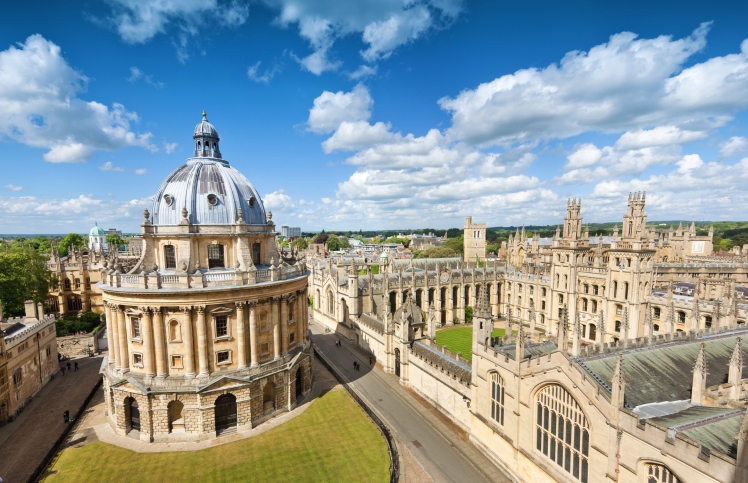 A large amount of filming also took place at Oxford to mark the scenes where Charles Xavier received his second superpower: a professorship. Oxford’s historic Catte Street hosted the majority of filming, including exteriors of the Bodleian Library. Hertford College also doubled as a pub, but Oxford isn’t short of the real thing if you fancy a tipple.

Lea Hall in Staffordshire is the perfect place for your league of superheroes to assemble after a hard day’s adventuring. It’s also notable for being the childhood home of a real-life superhero Florence Nightingale!

Scenes of Wonder Woman arriving undercover at the Belgian front-lines were filmed in the Kentish countryside in and around the village of Lower Halstow. The village and its waterside were dressed to look like a First World War encampment.

Interiors of the villains’ castle were filmed in the Long Gallery of Hatfield House in Hertfordshire (home of another hero – see below) while Arundel Castle in Sussex provided the exterior. The woods where Diana Prince rode on horseback are also familiar to superhero cinema fans as Bourne Woods in Surrey.

Fancy visiting the Batcave? Henrhyd Waterfall in the Brecon Beacons provided the natural exterior for Batman’s abode in The Dark Knight Rises. Meanwhile Bruce’s Wayne’s stately home of Wayne Manor was Woolaton Hall, which is just five miles north of Gotham in Nottinghamshire – real inspiration for the superhero’s fictional city!

Both Knebworth House and Hatfield House in Hertfordshire provided the exterior and interior of Wayne Manor in the earlier 1989 film Batman. Few effects were needed for either location.

Secret doors, spacious drawing rooms and the ability to drive round your grounds in a large 4-wheeled drive vehicle, the amazing Broughton Hall in Yorkshire even manages to out-Batman, Batman!

Guardians of the Galaxy

Most of Marvel Studios’ most cosmic adventure was filmed on studio sets, but it’s still possible to visit a few of the film’s key locations. London’s Millennium Footbridge featured as an escape route for the alien inhabitants of Xandar in the film’s climax (running away from the city’s Lloyds Building).

The final scene of the Guardians of the Galaxy being shown to their rebuilt spacecraft was filmed on the roof terrace of the One New Change shopping centre close to St Paul’s Cathedral. Open to the public, you can enjoy amazing views of London with a bite to eat.

Cliff Lodge in Devon has amazing views, indoor pool, hot tub and a jukebox in the games room, so your own out-of-this-world adventure will have an equally awesome soundtrack.

Superman II featured Kryptonian villain General Zod arriving in what was supposed to be the American mid-west, but was actually Black Park in Buckinghamshire. The small American town they invade was also actually Chobham Common in Surrey!

The Grade I listed ruins of Sutton Scarsdale Hall (near Bolsover Castle) in Derbyshire were made to look even more neglected in 2016’s Batman v Superman: Dawn of Justice.

Superman heads to his ‘Fortress of Solitude’ when he needs a little rest and relaxation, and you can enjoy your own relaxing solitude at Ghillie’s Lodge in the Highlands. The property boasts a gorgeous interior, stunning location and even a small gym if you fancy getting into superhero shape.

Harry Potter film locations to visit in the UK