Puffin perfection near Bridlington: Just 15 minutes from this bustling seaside town and a jewel in the crown of the Yorkshire Nature Triangle is the Flamborough Headland. RSPB Bempton Cliffs offers fully accessible and family friendly viewing of some 250,000 seabirds during spring and summer including the sought-after puffin, atop dramatic 400ft cliffs.

For the more adventurous, nearby Flamborough Cliffs reveal secluded turquoise bays with yet more puffins, orchid-topped coastal paths and a chance to explore pirates’ caves with local fisherman on their boats from North Landing. 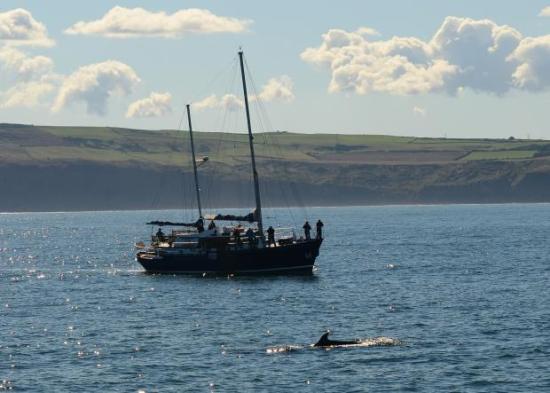 A whale of a time at Whitby: The giant bowhead jawbones looking out over Whitby’s northern cliffs give a hint of a dark past, but today whales are on a new hit list, as the town has become the region’s top spot for heading out to watch these magnificent mammals.

From July to October, 30ft minke whales pass along the coastline, and thanks to operators at Whitby and nearby Staithes you too can come eye-to-eye with these almost mythical creatures. In some years, white-beaked dolphins and larger humpback whales come to join in the action too.

A leap of faith at Stainforth Force: Autumnal white-water rivers twisting through the Yorkshire Dales already make for an impressive sight, but the annual ‘salmon run’ brings an added natural spectacle as these fascinating fish embark on their epic upstream journey.

After years at sea, the salmon return to spawn and face the mammoth task of swimming against relentless torrents and waterfalls for mile upon mile, often leaping high out of the flow. Try an overcast day in October and November following rain for your best chance.

See the light at Yorkshire’s land’s end: Around an hour from the City of Culture in Hull, Spurn Point is like nowhere else along the coast. With miles of sand dunes at the mercy of Mother Nature, this unusual location has a colourful history of wartime exploits, lifesaving rescues and lost villages.

Now, you can experience the most impressive view of all – from 128ft up within the renovated Spurn Lighthouse. Getting there is an adventure in itself, either on a 4×4 ‘Spurn Safari’ with the Yorkshire Wildlife Trust (look for deer, seals and migratory birds on the way) or on foot across the tidal breach in the peninsula – be sure to check the tide times before you venture across.

Rocking by the pool at South Landing: When was the last time you went rock pooling? If it’s been a while then head to South Landing near Bridlington where the Living Seas Centre and their team can give you all the top tips for this great family activity.

There’s guided seashore explorations to join in with, and if the weather turns typically British then the centre offers an array of hands-on and interactive indoor activities for the kids too. If you’re making a day of it, the centre also has all the latest wildlife sightings from along the coast including whales, dolphins and porpoises.

Seeing red at Snaizeholme: Surely the definition of cute, red squirrels can still be found in a few special corners of Yorkshire including near Hawes in the Yorkshire Dales along a specially created trail at Snaizeholme.

Smaller than their urban counterparts the grey squirrel, ‘reds’ can also be told apart by their tufted, stripy ears. Take a walk along the trail to visit the dedicated feeding area, although the squirrels could appear at any time!

You otter believe it: A firm favourite with wildlife lovers, the charismatic otter is unfortunately just as elusive as it is popular. Thankfully, following years of conservation efforts, the ‘river king’ is now back across the county and your luck could be in.

Tophill Low between Beverley and Driffield has a dedicated viewing hide with regular sightings (and a new visitor centre for 2017), whilst patient visitors could also be rewarded at Yorkshire Wildlife Trust’s Staveley reserve near Harrogate.

Go fly a kite: With a wingspan bettered only by Scotland’s eagles in the UK, the red kite is an impressive sight in Yorkshire skies. Boasting a distinctive forked tail, they are unmistakable and are a spectacle that can be enjoyed in many parts of the county, notably at Harewood House where they were reintroduced around 18 years ago.

Other top spots include the Yorkshire Wolds, where kites can gather in good numbers in winter roosts in woodlands close to the village of Nunburnholme.

By Tom at the Yorkshire Wildlife Trust.